Registration for Term 4 is now open!

Academy sessions will be held at Seaforth Oval on Wednesday evenings.

This program is open to any player from any team from age groups U8 – U16.  The program works with ability and age appropriate groups focusing purely on the technique aspect of the game.  A lot of the time players will find themselves with one ball each working on ball manipulation in a small group or small sided setting.  Maximising touches on the ball, sessions are intense and heavily assist in enhancing the player’s technical base.

Skill Development Training is run on a term basis.  The program will run once a week on either a Monday or Wednesday.  In 2019 this program will commence in Term 1 and run through to the end of Term 4.

We’re open to everyone

The Academy is open to anyone or any team who wishes to improve.  There is no trial process required to participate in our academy. 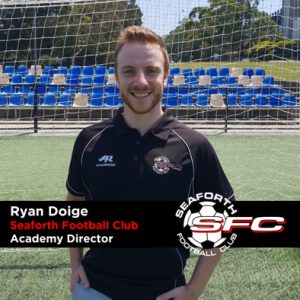 Seaforth FC is excited to announce that our new Seaforth FC Academy Director is Ryan Doidge.

Ryan comes in to the role with a wealth of coaching experience.  Before moving to Australia, Ryan worked in the USA with Major League Soccer side the New York Red Bulls within their pre-academy, working with youth players 12 years and under.

In Australia Ryan has worked with National Premier League sides and has also worked on behalf of some A-league clubs.

Most recently Ryan left a role with the Western Sydney Wanderers after working with their W-League team.

Ryan currently also works as a Technical Director at another club where he established their academy program and will bring this knowledge and experience to add a level of professionalism to our club through our new academy structure.

Formed in 1963, Seaforth Football Club is one of the largest football clubs on the Northern Beaches. We are a grassroots club committed to our local community by building well rounded, respectful young players and parents through football.

Our club is run by a diverse, passionate group of football lovers and volunteers, with a vision to bring football, fun, fitness and family together for our members.

Sign up and get all the news and updates